In June 1949 Peter Tranchell submitted "a scenario & one scene of libretto, written in collaboration with Stephen Joseph. No music" to the Arts Council of Great Britain's opera competition for the Festival of Britain in 1951; the submission was rejected in the early stages of the competition (Foreman, 2004). But with the particular encouragement of Patrick Hadley, the work found a home with the 1951 Cambridge Festival, and was performed on 30 July 1951 by a largely amateur and student cast, at the Arts Theatre, Cambridge.

A preview. London Evening News, 17 Jan 1951: "Was his face red? – Or a Festival Opera is Born. By the time Peter Tranchell finishes writing an opera for the Festival of Britain I predict he will be permanently red in the face and chronically out of breath. For Tranchell, 28-year-old assistant lecturer in music and Cambridge University, holds his breath while composing, only drawing it in at the end of a bar. “By the end of a scene,” he told me with a broad grin, “I’m usually bright red and panting.” He gets his inspiration to write music when cycling and on the tops of buses. Gregarious by nature, he likes his home to be full of people when he is composing. His most unusual possession: a dinner jacket with a band of gold sequins worked diagonally across from shoulder to hip. A friend of Tranchell’s once suggested he should write one about “Tess of the D’Urbervilles.” Tranchell tried to borrow the book, was given “The Mayor” by mistake. Since then he has read all Hardy’s works, but still considers “The Mayor” the most suitable. This is Tranchell’s first large-scale work. But he has written incidental music for amateur productions of anything from Priestley’s “Johnson Over Jordan” to “Macbeth.” This was partly at Eastbourne College where he taught music for a year and partly as an undergraduate at Cambridge."

A review. "Tranchell has seized the mood of Hardy's novel with a precision uncanny in a composer whose idiom seems naturally so sophisticated.... He has devised ensembles, duets, and other set pieces with a strongly effective, and fundamentally romantic feeling for mood and placing." and "If not a total success, then, The Mayor of Casterbridge offered promise and much compelling interest for anyone interested in the development of an English operatic tradition." (The Times, 31 July 1951, 8 (Times Digital Archive). And Eric Blom (editor of Music & Letters), in reviewing the opera in The Observer, London, Sunday, August 5, 1951, remarked: "Mr Tranchell has decidely leapt to fame at a single bound. His second act is a near-masterpiece." and overall called it "an English stage work of exceptional quality."

Tranchell described the "tribulations of a composer getting his first opera performed" in A Cambridge Opera in Cambridge Today Michaelmas Term 1951.

Here are some scans of the original vocal score from 1951, the music written in Tranchell's own hand. 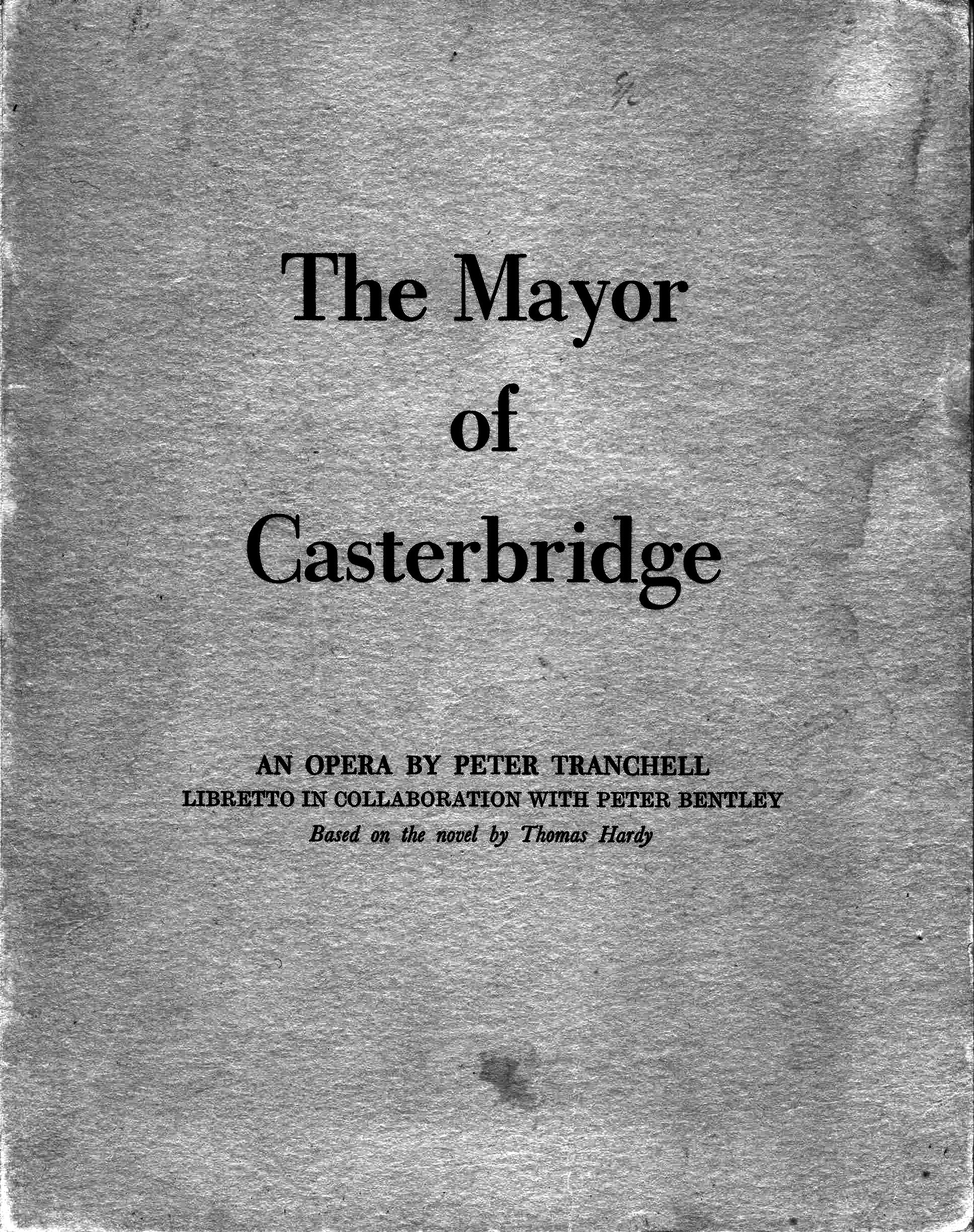 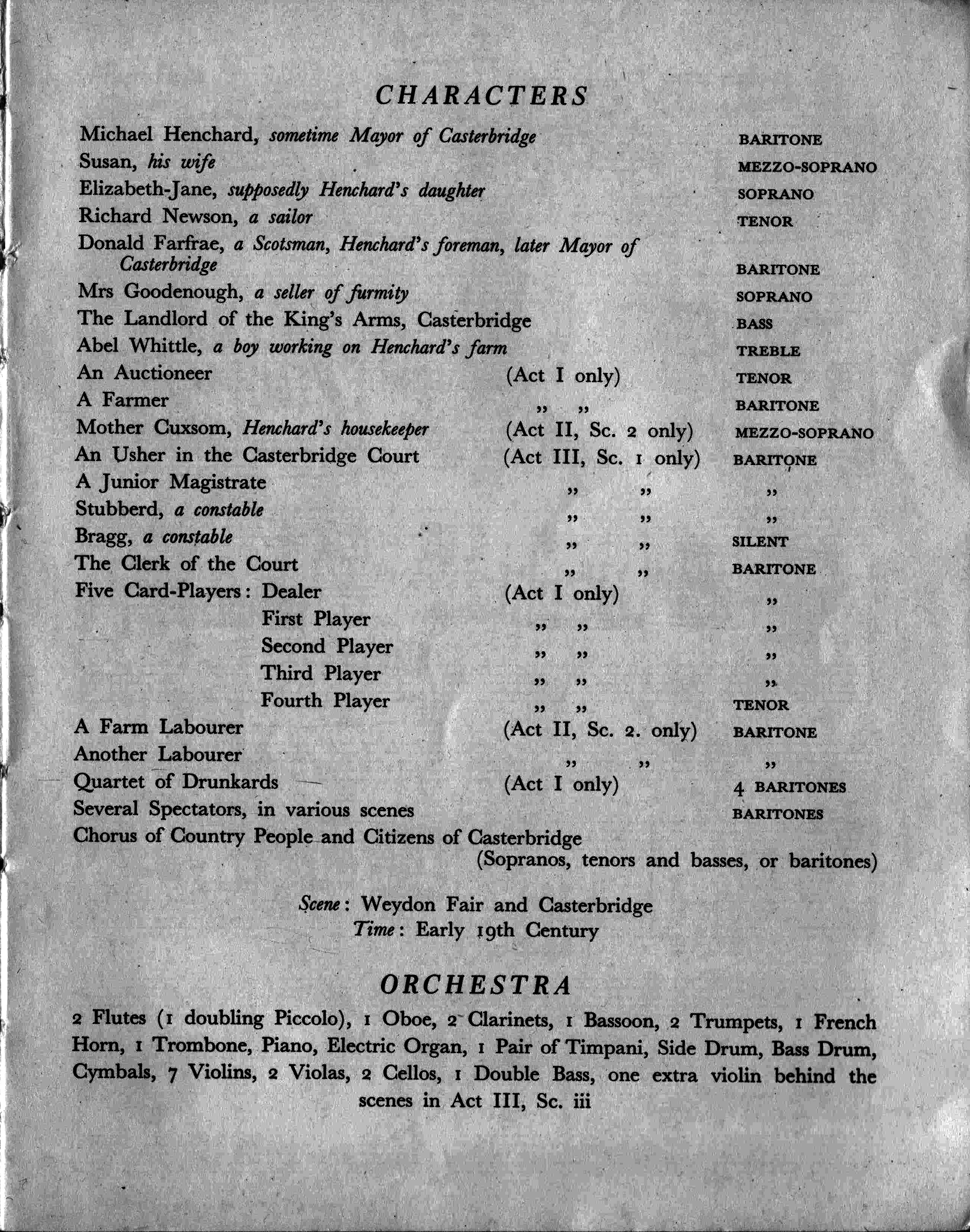 The opening bars, subsequently revised for the 1959 staging. 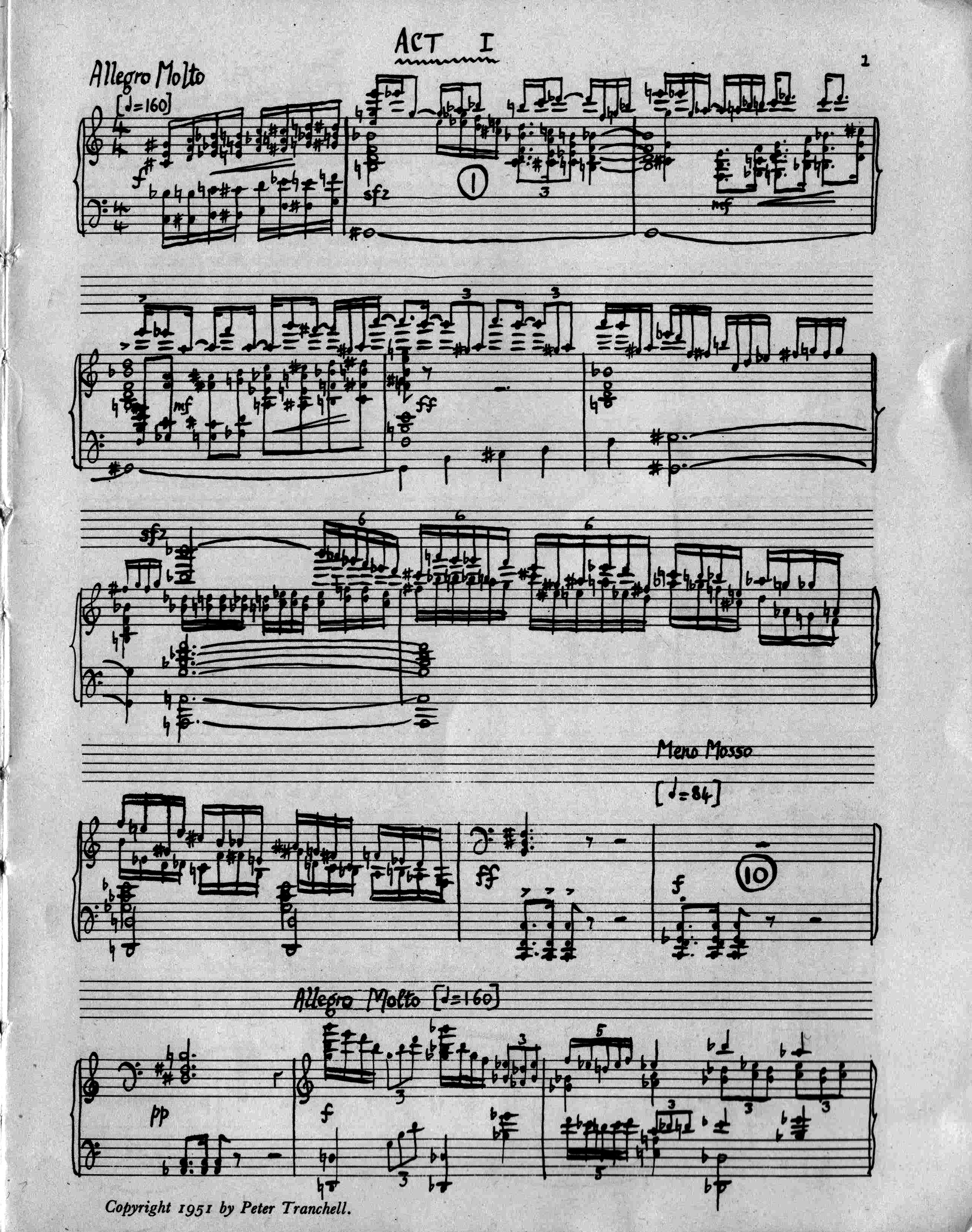 Recording of Closing Scene: The Mayor of Casterbridge from the Commemoration CD.

A letter from Ralph Vaughan Williams

Unfortunately there was no opera from the competition that might have crowned this activity, though Peter Tranchell’s competing opera The Mayor of Casterbridge, rejected by the competition at an earlier stage, was produced at Cambridge in 1951, and might well have been capable of fulfilling the expectations of the organisers. Unfortunately it was side-lined by the simultaneous production of Billy Budd at Covent Garden.

'The Mayor of Casterbridge'

The Cambridge Festival (28 July to 18 August) presented on 30 July at the Arts Theatre the first performance or Peter Tranchell's opera 'The Mayor or Casterbridge'. The composer, who is twenty-nine, is an assistant lecturer in music at Cambridge University. Peter Bentley, also of the University, was the producer. The men collaborated on the libretto, which is a compressed and crude version of Thomas Hardy's novel. Compressed, no doubt, it had to be. But the total omission of Lucetta made the romance of Farfrae and Elizabeth-Jane flat and conventional. Their first encounter, turning into a flirtation, was ludicrous and indeed embarrassing; though a more experienced producer would have made it less so. Such a producer would, indeed, have smoothed out several other awkward moments, and would have avoided the over-crowding of the stage during the opening scene when Henchard gets drunk and sells his wife. The musical texture of Tranchell's score is thick; its basic idea often seems to be the addition of one or two wrong notes to the right chord. But it is skilfully orchestrated, and sounds both less jagged and less monotonous harmonically than it looks in vocal score. The music cannot however be said to do more than keep the listener mildly interested while he waits in vain for a moment of compulsion or illumination. Yet in his forceful setting of words, and in his appreciation of the need for a well-balanced layout of solos, ensembles, and choruses, Tranchell reveals a certain sense of theatre which may bear fruit in future. Robert Rowell, one of the few professionals in the cast, sang creditably as Henchard; so did José Stubbings, as his wife. Farfrae (Antony Vercoe) was likeable, but, without a Scots accent, unbelievable. The orchestra, which included piano and electric organ, was mainly composed of students from the Royal College of Music and was conducted by the composer.