Twice A Kiss, an operetta in one act for seven soloists, piano and electronic organ, with libretto by Maurice Holt, was written for Peter le Huray and St Catherine’s College to perform in May Week in June 1955.

In a letter to his parents dated 24 June 55, Peter wrote:

We have just finished the most gruelling term. In addition to the usual examining & teaching, I’ve been engaged on two ventures. The St Catharine’s College Music Society asked me to write an operetta for their Mayweek Concert. I did. A young Cat’s man called Maurice Holt wrote a very good libretto. At least, it was good after all the tinkering & improvement I demanded of him. He was very goodnatured, & made all the adjustments goodhumouredly. (A change from the previous oaf I was obliged to work with.) The thing was called “Twice a Kiss” & lasted about 45 minutes, – the accompaniment for a piano & electronic organ. This combination was excellent – played by the two organ scholars of the college, one present, one past but still resident. ... The audience enjoyed it, & many people said nice things about it. [...] Ovations at the end for librettist and composer. The panelled hall made the Restoration costumes stand out with a dream-like brilliance.

The title-page of the new work read

An Entertainment in one act

The libretto was by Maurice Holt, an undergraduate from St Catherine’s, who recalled that he offered to write a book possibly set in the Restoration – “I'd been reading Wycherley and thought the period deserved a re-run. I wrote it during the vacation, inventing the story, and Peter chose the title.”

The cast consists of:

For a revival by the Amateur Dramatic Club in the Lent Term of 1982, when the role of Honeywood was sung by Christopher Purves (who went on to enjoy a distinguished operatic career after a spell in Harvey and the Wallbangers) the word “Entertainment” in the title was changed to “Charade” and Peter provided an introduction:

The scene is the principal chamber in the London house of Sir Robert Asymptote during the late 18th century.

Sir Robert fancies himself as a philanderer and a playwright, but his wife is watchful and his play is pitiful. If he had money to hand, he could induce someone to perform the play, but he has lent a large sum to Sir Peter Parallel and cannot get it back. His ward, Sarah, is an heiress, but her inheritance is out of reach until she comes of age or gets married. Should she marry Sir Peter, Sir Peter’s debt could be paid and Sir Robert’s play could be promoted.

Sir Robert therefore gives a party in the hope that Sir Peter will offer for Sarah, and Mr Honeywood will offer for the play. But things turn out differently. Sir Robert puts his foot down, only to relent when he is assured that his objectives may be gained in another way.

In the Prologue, Knipp, the house-boy, refers to the old rhyme: Once a miss, twice a kiss, three times a letter, four times something better; upon which the plot is loosely hung. Susan, the housemaid, finds an anonymous letter of assignation. Is it for her? Is it from Sir Robert? She hides it in a bowl of flowers – where Sarah promptly finds it.

The wit and the tone of the piece is set by the Prologue, spoken by Knipp:

Whereas the art of opera can create
A work that’s fit for any gourmet’s plate.
The author and the composer humbly wish
To offer you a much more trivial dish.
Theirs is a tale occasioned by a letter,
Proceeding, through a kiss, to something better.
The composer begs that you forgive it if
The music sounds a little bit derivative.
The author craves your pardon for a plot so thin
And both now bid me leave you, that we may begin.

The music proceeds in a lightly accompanied rhythmic recitative interspersed with solos, duets and ensembles. For the revival, it was suggested that the organ part might be orchestrated. However, Peter felt that the entire accompaniment would have to be recast in order to do that, something he did not have time for when it was being discussed.

As well as Christopher Purves, the 1982 ADC cast included Simon Crookall (until recently CEO of Hawaii Opera Theatre), Jo Maggs (who sadly died in her 20s), John Glover (who continued to sing for a number of years), Richard Craddock (now an architect in Scandinavia, having eschewed a musical career), Nicola-Jane Kemp (who went on to a career as a coloratura soprano, having been a contralto at Cambridge) and Fiona Stuart-Wilson (soprano and member of The Archduke's Consort).  The conductor was Michael Law, who runs the Piccadilly Dance Orchestra as well as having his cabaret show.  Mark Warman was one of the two pianists, now a conductor and Musical Director in the West End. 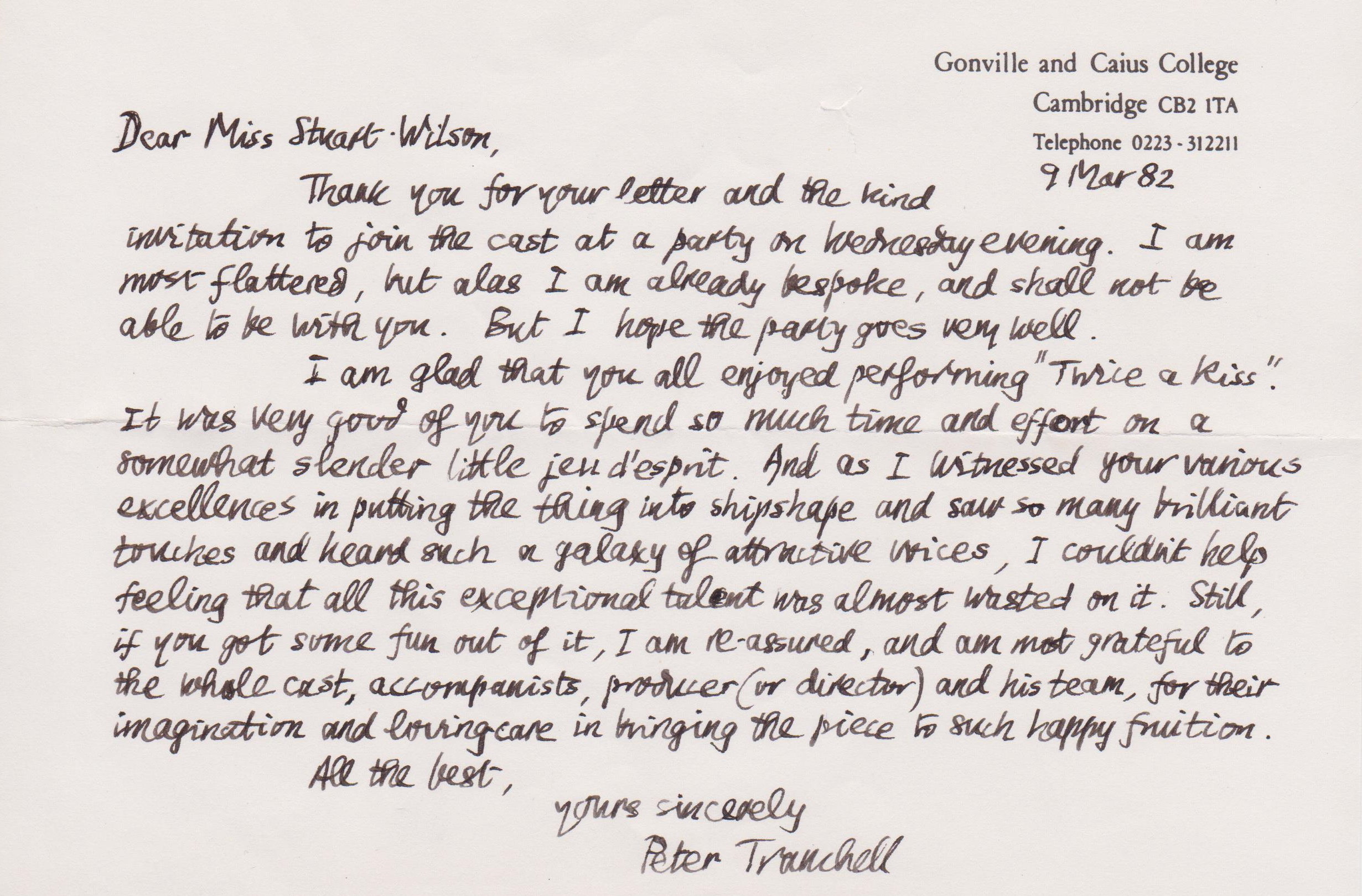 The College Music Society is nothing if not courageous. In recent years it has taken Edward German's Tom Jones, Menotti's Telephone and Dibdin's Recruiting Sergeant in its confident stride, but last June, in the College hall, it advanced a stage further and put on its own creation. Outside assistance had to be obtained, of course, for no undergraduate community, masculine at that, could be expected to provide a cast of the sort required for a full-blooded operetta, but the fact remains that St Catharine's, in the person of Maurice Holt, wrote the libretto, and in that of Peter Le Huray, harnes- sed to an electronic organ, provided a most effective if unusual orchestra. Then John Bristow made as gorgeous a gallant as ever trifled with a lady's affections, and the Society naturally did the donkey work of production. The programme itself can best introduce the reinforcements, for it reveals both their parts and their purpose.

SIR ROBERT ASYMPTOTE, a pompous knight and a would-be playwright; although a jealous husband, he is secretly given to amours. Anthony Lister

MR HONEYWOOD, an actor and the proprietor of a playhouse at which Sir Robert would have his play performed. Gordon Clyde

SARAH, orphan ward to Sir Robert, who would wed her to Sir Peter so that he might pay off his debt to Sir Robert with her wealthy inheritance. Helen Papanicolaou

It was certainly a lively plot, developed with wit and resource, not to mention an authentic 17th century flavour, and Peter Tranchell's music—he composed the music for The Mayor of Casterbridge at the Cambridge Festival in 1951 —was not only adequate for every situation but, at times, placed the vocal score firmly in the category of grand opera. With the thunderous reverberations of two excellent basses— Sir Robert and Mr Honeywood—to build on, the ladies were free to trill with never a care at almost stratospheric heights. Indeed, the resulting ensembles were not a little reminiscent of the Scala, Milan, in full blast. There were songs, too, of the best, and to hear Sir Robert elaborating his conviction that' A Man must go Gambling and Wenching '—

If merry you'd be reckon'd in the reign of Charles the Second,
You have to live a kind of double life.
It doesn't really matter if you're something of a satyr,
Provided you conceal it from your wife.
Neither ever crows about the things the other knows about.
Pretended lack of knowledge is the thing.
It's a social convention which, like others I could mention,
Was introduced from Paris by the King.

If you're anxious for gains but are lacking in brains,
The Army will answer your search.
While if you've a flair for subsisting on prayer,
You will naturally enter the Church.
But a man whose intellect's high (Albeit modest and shy)
Will wish, I venture to say,
To act a part in a play!

If your courage is strong, but your politics wrong,
Then the Navy holds treasures in store.
While men with an eye for a well-contrived lie
Will turn it, of course, on the Law.
But a man whose nature is sweet (And perfectly free from conceit)
Will wish, I venture to say,
To act a part in a play!

If you find, when you add, you have more than you had,
Then Accountancy beckons you on.
While if you've a quirk for avoiding all work,
Your career should be that of a don.
But a man of grit and resource
(Though rather retiring, of course)
Will wish, I venture to say,
To act a part in a play!

—to hear all this was not only a joy: it left one regretting that the acknowledged masterpieces of opera were denied the services of Maurice Holt.

To librettist, composer and cast all credit must go for creating and interpreting a work that demanded technical skill of a high order, but even that would have availed little without the labour and thought which must have gone into rehearsals and production generally. Here, of course, the Producer, Anthony Pearce, and the Music Director, David Epps, must take a curtain—and not only on their own account, deserving though it is, but also on that of such indispensable, though invisible, performers as Ian Chippendale, Stage Manager, and Peter Hill, Electrician. Certainly the audience privileged to attend the May Concert of 1955 will gladly join the Committee of the Music Society in thanking all who assisted in the production of Twice a Kiss.