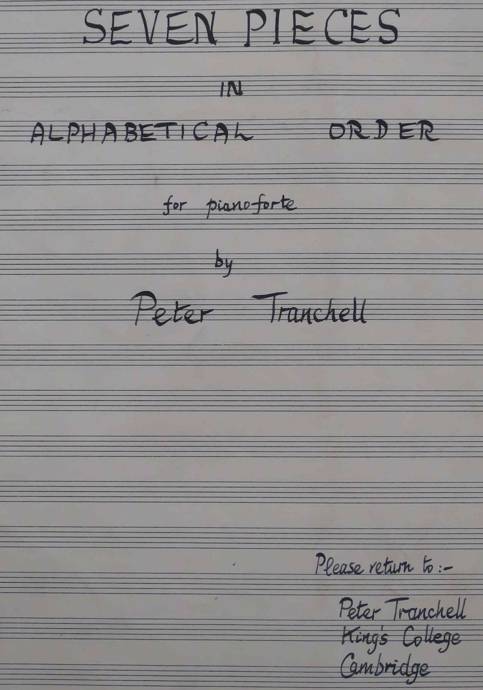 Note on title page:
'These pieces are designed to be played in the order given, on a piano which has the top C.
It is said that in Hindu music certain notes are named after creatures.
This work, first written in July 1947, was re-written in September 1960'.
Note on title page of original: 'The notes of the Hindu scale are called after various birds and animals: C. Peacock - D. Rainy season bird - E. Goat - F. Crane - G. Cuckoo - A. Frog - B. Elephant. The music attempts to illustrate the animals and suggest the appropriate key'.

Peter Marchbank notes "These pieces are a reminder that Peter Tranchell spent his childhood in India. While he was sent to England to attend a Prep School, he must have retained images and sounds from those early years." (pers. comm.).

This PDF includes a cover sheet and all seven pieces:

Cover and all pieces

Individual pieces can be downloaded below, if desired:

In his analysis of Tranchell's early works, Peter Marchbank studied the earlier versions of the work. His comments, repeated below, suggest that substantial modifications were made in the 1960 revision that we have published above:

A work that did show considerable maturity was his Seven Pieces almost in alphabetical order for piano. The first pencil sketch was probably started whilst Peter was in Malta since, stuck on to the inside front cover, is a sheet containing “Some Nice Thoughts on Peter’s Pieces” written by Mrs Helen Dray in her precious style and florid hand. By the time of the second pencil sketch, which is dated July 1947, Peter has typed these Nice Thoughts out and stuck them before each piece. He also notes on the front that the work has had three first performances in as many months! The final copy is in ink and Peter has now eschewed the descriptive and fanciful notes. Instead, he limits himself on the title page to a brief introduction: The notes of the Hindu scale are called after various birds or animals. The music attempts to illustrate the animals and suggest the appropriate key.

None of the pieces has a key-signature, though each uses its designated note as a tonal centre.

A languid melody in octaves in the right hand is accompanied by highly chromatic harmony. At the centre of the movement comes a Quasi Cadenza of repeated chords and arpeggios, which Mrs Dray likens to the peacock opening its tail. After this, the opening returns with a more ornate accompaniment.

The chattering opening section is marked “birds”, while the arpeggios of the Quasi cadenza are marked “rain”. Again the music of the opening returns. The slower four-bar Coda begins with a dissonant chord in the left hand marked con tutta forza and is intended to suggest a gong before the piece relaxes to a close on a D minor chord with an added leading note and supertonic.

Again, there are two contrasting ideas: a rhythmic motif and a “nobilmente” figure.

There are no signs of the cuckoo’s usual song here. Instead, Peter has slowish cantabile chords over an almost monotonous (dotted crochet quaver quaver quaver) accompaniment in the left hand. The music starts pianissimo and crescendos to forte before it dies away and ends a niente.

The music is almost bi-tonal with the two hands in very close proximity. This brief movement ends with “the frogs taking refuge in the pool leaving only a ripple.”

Mrs Dray likens this movement to a procession of elephants. It certainly makes for a spectacularly bravura and virtuoso finale to this fine suite.

Perhaps for the first time, Peter shows a real understanding of piano writing and his use of chromatic and dissonant harmonies is now a part of his idiom rather than being imposed upon it. These Seven Pieces would certainly be worth hearing in performance.