The full anthem Cantantibus organis for St Cecilia’s Day was written by Peter Tranchell in 1987 for use by the choir of Gonville and Caius College, Cambridge, where he was Precentor (Director of Music), and it was sung at Evensong (presumably on St Cecilia’s Day, 22 November) that year. It was written for S.A.T.T.B. and Organ.

The final page of the manuscript, reproduced after the computer-set music, gives the relationship between the music in the anthem and the plainsong settings of some of the proper antiphons for the Feast given in the Liber Usualis. For the refrain Tranchell has used a shortened and slightly adapted version of the first antiphon at Second Vespers, Cantantibus organis, Cæcilia Domino decantebat in corde suo, and the melody is shown as deriving loosely from the plainsong setting of part of the Antiphon for the Magnificat at First Vespers (Est secretum, Valeriane...), specifically angelum Dei ... amatorem, followed by the beginning of the second Antiphon at Second Vespers, Valerianus – in retrograde. The melodies of the solo verses are shown as similarly related to parts of the plainsong melodies of these two Antiphons together with the second Antiphon at Second Vespers.

The origin of the English words, which tell the story fleshed out from the antiphons and according to various Lives of St Cecilia dating back to Chaucer’s Second Nun’s Tale, Ælfric’s Lives of Saints and before, is uncertain. They are possibly by Tranchell himself, given that they are required to fit the melodies derived from the various plainsong fragments, although the near-doggerel is uncharacteristic of his few poetic writings and nowhere near the class of the works on the subject by Dryden, Pope and Auden.

The full score is provided here (or click on the image below to open the PDF). Please contact us if you would like to order pre-printed copies. Please also see our guidance on the use of this score. 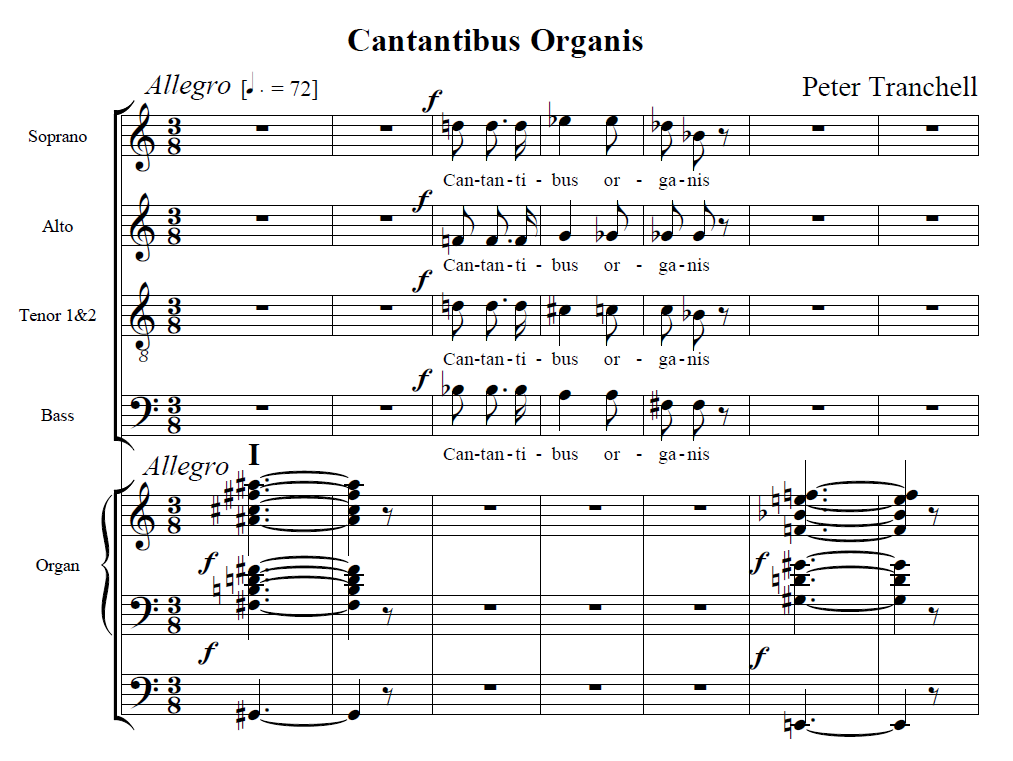