Several versions of this quadruple chant are known. Three are found in the Cambridge University Library archive:

The chant is also published as Psalm 103 in the St. Paul's Psalter (Scott, 1997). We have not seen this version (it is not found in the CUL archive), but the recording suggests it is in D minor and lacks the separate variant for the Gloria. It features on the CD Psalms from St Paul's, Vol. 8 93-104, Hyperion http://www.hyperion-records.co.uk/dc.asp?dc=D_CDP11008 The St Paul's Psalm 103 version features in a live BBC radio broadcast from St Paul’s Cathedral London, 20 December 1978, with the choir of St Paul’s Cathedral, directed by Barry Rose, and Christopher Dearnley (organ), now published on YouTube by the "Archive of Recorded Church Music".

The typeset editions use the * version above as their source. Please also see our guidance on the use of this score. 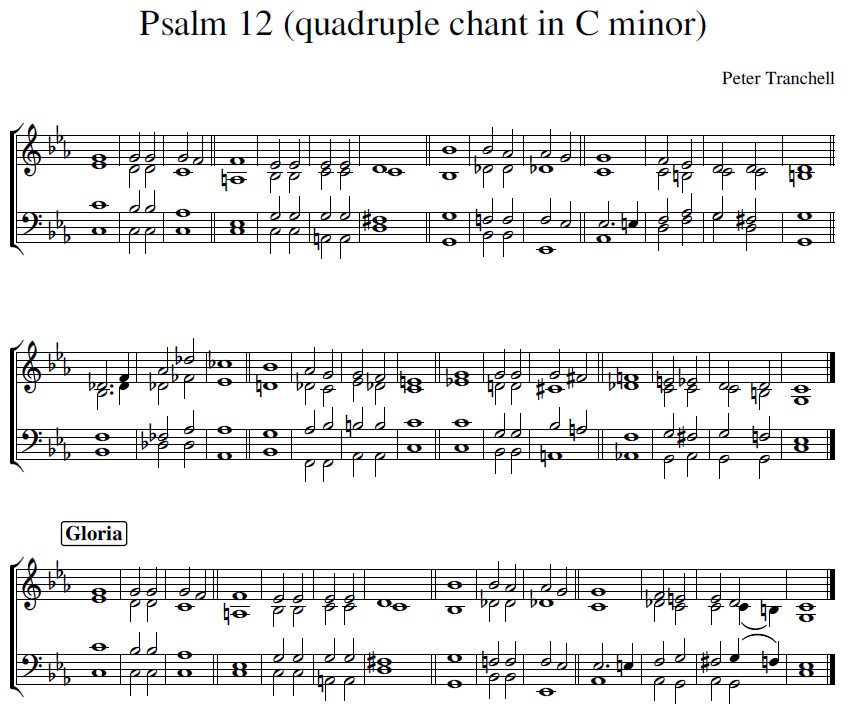 1. Help me, Lord, for there is not one godly man left :
for the faithful are minished from among the children of men.
2. They talk of vanity every one with his neighbour :
they do but flatter with their lips, and dissemble in their double heart.
3. The Lord shall root out all deceitful lips :
and the tongue that speaketh proud things;
4. Which have said, With our tongue will we prevail :
we are they that ought to speak, who is lord over us?
5. Now for the comfortless troubles' sake of the needy :
and because of the deep sighing of the poor,
6. I will up, saith the Lord :
and will help every one from him that swelleth against him, and will set him at rest.
7. The words of the Lord are pure words :
even as the silver, which from the earth is tried, and purified seven times in the fire.
8. Thou shalt keep them, O Lord :
thou shalt preserve him from this generation for ever.
9. The ungodly walk on every side :
when they are exalted, the children of men are put to rebuke.

With dynamics and pointing from the 1970s/80s Caius Psalter