The Waltz and Calypso is a wind octet written for the inauguration of the Cambridge University Music School Concert Hall, 11 November 1977. It is scored for 2 x oboe, 2 x clarinet in Bb, 2 x horn in F, and 2 x bassoon.

At the end of the piece we find the following, in Tranchell's hand:

Calypso:
Sandy Goehr
was heard to purr
as a quaint erection arose.
What it's for,
and is there more,
are things that nobody knows.
All concur
twould be premature
to raise a dubious note.
It looks like Noah's Ark turned o'er
Question is: will it float?

Goehr had been appointed Professor of Music in 1976. This poem, added perhaps for the amusement of the performers, presumably concerns the form of the building being opened, seen here from the back, as well as the wider uncertainties about Departmental budgets and facilities alluded to in the report by Rushton (below). 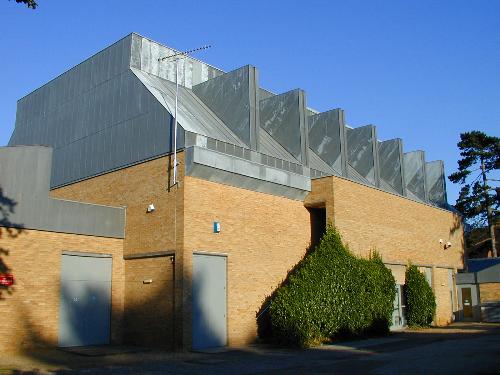 The University Library Newton archive records this note on the envelope: (‘On CAmBriDGE’, and ‘City of God’, ‘Why does my heart go boom’, ‘Gerontophily’, ‘Magnificat in B flat’). A few bars into the first Waltz section we find this: and in the Waltz after the Calypso we have this: 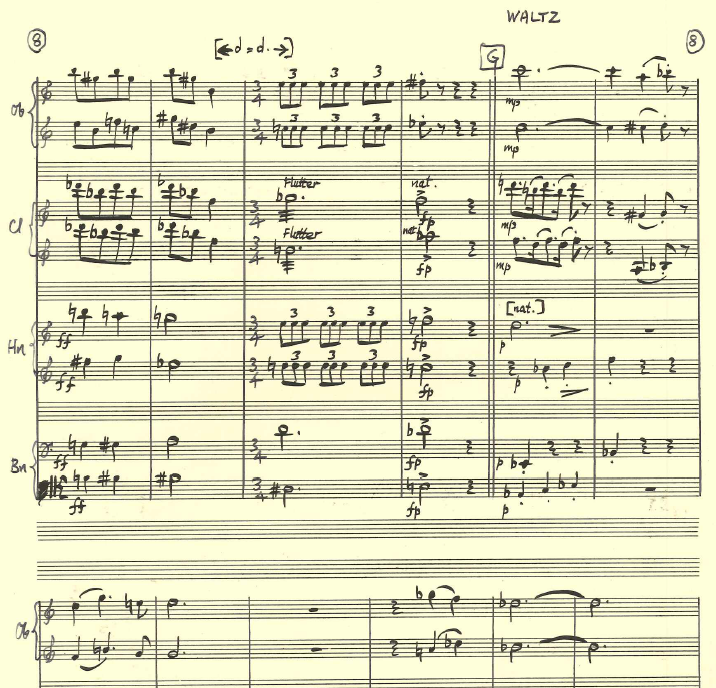 So we have ‘On CAmBriDGE’.

Then at figure A in the horns we have a snatch of City of God (RICHMOND): Also in the Waltz we find a melody from Jack Hylton's "Boom! Why Does My Heart Go Boom?", only altered in its final notes (and accompaniment!) - the melody appears @ 30 seconds in this recording:

Gerontophily provides the main subject for the Calypso section, and there may have been one or two in the audience (and possibly the band) who struggled to keep a straight face as a result (Gerontophily is one of Peter's ruder cabaret songs, and he would introduce private performances with comments like "Now how many windows are open? I don't want the Chaplain to learn the words."). Private recordings of Gerontophily and other works can be listened to in the Anderson Room at the University Library. The poem above is similar in form to Gerontophily's verses, which analysed the relationships of a range of historical and mythological characters including Queen Elizabeth I (who "beneath her dress, was indisputably an old man"), Hadrian & Antinous ("this lovely Bithynian became his minion, and their mutual joys were continuous") and Count Gesualdo ("it wasn’t a madrigal that made each lad wriggle...").

The ‘Magnificat in B flat’ is Tranchell's own, composed in 1975 and recorded on Music from Caius - it appears in the closing section of the Calypso, for example "A - bra - ham":

The Calypso section featuring the tune of Gerontophily morphing into the Magnificat can be heard in this extract, as performed electronically by Musescore notation software (including a mysterious series of clicks near the end of this extract - at at least they are on the beat):

The concert hall of Cambridge's new music school was opened by the university's chancellor, Prince Philip, on November 11. The hall, which can be made to accommodate over 500 people, has an orchestra pit and promises to be useful as a musical theatre; it is an attractive place, visually appealing and well finished with an agreeably warm acoustic, for chamber and orchestral music, lectures and recitals. It would be pleasant to report that the faculty now possessed accommodation to match, but the hall is only the successful first stage and the central part or an extensive and imaginatively conceived complex proposed by the architect, Sir Leslie Martin; there is no knowing when the entire scheme can realized. It is hoped soon to build much-needed lecture rooms, but money is lacking for a library to accommodate both the Pendlebury Library and the University Library's music, and for seminar and practice rooms, and lecturers' rooms. The offices and the Pendlebury Library are now in the converted house and stables next to the hall (no.11 West Road) while the old music school at Downing Place is to become a demonstration theatre for pathology, a metamorphosis to which only the pen of Berlioz could do justice.

The faculty has celebrated its move in various ways. A series of public lectures was inaugurated by Elliott Carter, who also heard accomplished performances of his own sonatas for cello and piano, and for harpsichord, flute, oboe and cello.

Outstanding among the performers, now or recently students in the faculty, were David Lockington in the cello sonata, and Paul Webster, who played both piano and harpsichord. A concert promoted by the faculty as part of the Arts Council's Contemporary Music Network and given by the brilliant American ensemble, Speculum Musicae, with Phyllis Bryn-Julson, included Carter's A Mirror on which to Dwell, and a new work, The Rivers of Hell, by Robin Holloway, a teaching member Of the faculty. A short concert followed the opening ceremony, the performers again being mostly undergraduates. A Bach cantata in honour of the Prince of Anhalt-Köthen (the serenata Durchlaucht'ster Leopold BWV173a) was not only charming but by analogy suited to the Occasion. It was sung by Jill Gomez and Richard Jackson, directed from the harpsichord by the organist and choirmaster of King's College, Philip Ledger. Before this no less than nine composers had been honoured with first performances (some kind of a record?) in a miscellany composed for the occasion— A Bouquet for Cambridge, based on the city's musical letters CABDGE. If nothing else this brisk succession of miniatures showed that Cambridge imposes no stylistic conformity on its alumni; there was even some friendly dissension as to whether B represented B♭ or B♮. The ensemble was a wind octet directed by the professor of music, and the composers were the past and present professors, Robin Orr and Alexander Goehr; four of the present lecturing staff, Peter Tranchell, Hugh Wood, Robin Holloway and Julian Rushton; and David Blake, Peter Dickinson and Jonathan Harvey, who have gone from Cambridge to colonize the universities of York, Keele and Sussex.

Please contact us with any memories of the opening ceremony or other insights. We are preparing the score for publication on this page.