A Concert Entertainment in One Act

The Music by PETER TRANCHELL

Daisy Simpkins was first performed at the May Week Concert in Corpus Christi College June 13th 1954.

By a charter granted to the University by Elizabeth I the Proctors were given power to arrest in Cambridge “public women, procuresses, vagabonds and other persons suspected of evil”. Women so arrested were tried by the Vice Chancellor in the Spinning House (on the present site of the Police Station in Regent Street) which was also the prison to which they ware committed, usually for three weeks, if found guilty. The usual charge was that of being in the company of a number of the University. The court was not open to the public, there was no jury, and the prisoner was not allowed counsel. Naturally this proctorial power was greatly resented in later days – by the town and by many sections of University opinion. The debates on the legal and moral issues involved reached a climax in two cases in 1891, which occasioned much controversy and even questions in the House of Commons. The story of Jane Elsden and Daisy Hopkins can most conveniently be found in D A Winstanley’s ‘Later Victorian Cambridge’.

This Entertainment is based on these two incidents, though they have been telescoped into one. For anyone who thinks that such matters should not be treated in this way, here is part of the Leader in the “Cambridge Independent Press” for February 1891: “That it should be in the power of a Proctor to imprison women on suspicion and to hale them before a secret court, where they may be condemned without legal evidence and without any of the guarantees for fair play which the law provides, is a state of affairs much more suitable for comic opera than for everyday life in this year of grace 1891.”

Click on the image below to open the PDF libretto. 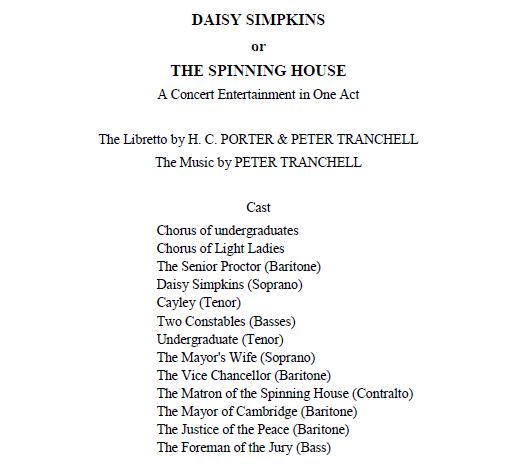