Peter Tranchell composed a number of settings of the Preces and Responses for use in the Chapel of Gonville & Caius College, Cambridge, where he was Director of Music from 1960 to his retirement in 1989.

The composer’s note at the end of the manuscript reads: ‘‘The Virgoan Responses were composed late August* 1972 for ATBrBB unacc, revised 1976, re-written for SATBrBB unacc in late August 1987. P.A.T.’’

* the Virgoan period of the year.

1972 was when the Chapel Choir first included male altos in addition to the established Tenors, Baritones and Basses. This set has a number of companion settings, all for male voices with altos at the top, most named after signs of the astrological zodiac: Arian (1973), Libran (1972), Quintilian (1981) and Sagittarian (1981). As the Virgoan was the only set Tranchell revised for the Chapel Choir when sopranos joined, it might be assumed they were his favourite.

We are making three versions available. 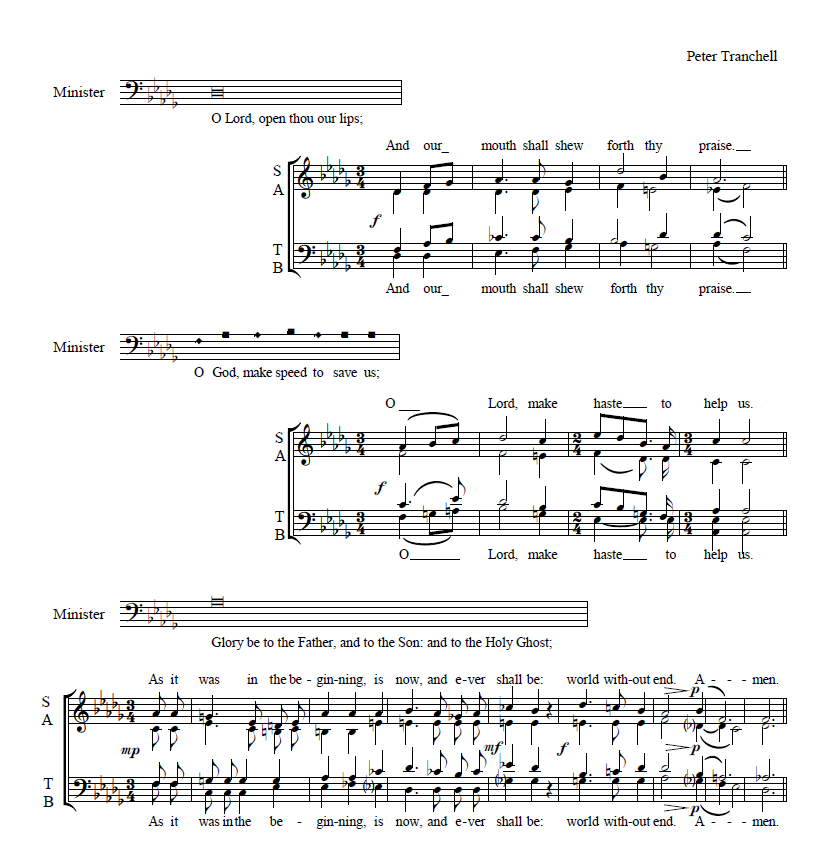 For use in Brecon Cathedral we have transposed to D major, presented the four parts on separate staves, and made some minor changes to bar divisions. Only one note is changed: the G natural in the 2nd Tenor part on "joy-ful" has been raised to a G sharp, which we think is what the composer intended.

An edition for use in Carlisle Cathedral, prepared with the assistance of Mark Duthie. The same as the Brecon edition, with the response "Because..." raised by a 4th.

Please also see our guidance on the use of these scores.