Some information from two articles concerning the Gonville & Caius College chimes. Peter Tranchell included Wood's "It was an English Layde Bright" on the LP Music from Caius.

The opportunity and challenge of composing a set of Bell chimes comes to composers comparatively rarely; so when, in 1910, an anonymous donor announced that he would present the College with a chiming clock, the then Organist and Director of Music, Dr. Charles Wood (1866—1926), to whom the problem of the musical aspects of the chimes had been referred, had some interesting problems to solve.

His thoughts on the matter are preserved in a sequence of rough notes (evidently intended as a basis for public utterance) scribbled on a sheet of manuscript paper and found by chance among his miscellaneous sketches at present deposited in the College library.

(2) how to get variety with the least amount of annoyance to others in College and in the neighbourhood.

"After a good deal of consideration I decided that the best series of notes for the purpose would be the following:

"This sequence of notes is in itself a melodious chime but unfortunately I had to reject it as it already exists in the. . . . . (unfinished sentence)"

In the event the chimes as finally evolved used the given sequence as follows:

Their melodic germ is to be found in a part-song for male voices* that Wood had published ten years previously:

but there is no evidence that there was any implied symbolism in the choice.

Though Dr. Copley considers no symbolism is intended, Mr. Tranchell suggests that the ballad ["It was an English ladye bright"] by Sir Walter Scott, with its tragic tale of internecine strife, has a striking feature for anyone who knows it:—the obsessive recurrence of a line (variously varied but basically) "But Love will still be Lord of all"; surely a pertinent reminder for a Collegiate Institution.

The five quarter bells of the chime, which was presented with the clock, have each round the upper rims the inscription: Ex dono Christopheri James A.M. Socii A.S. MCMXI; and each bell has its own inscription in hexameter form:

The chime was composed by Charles Wood and was related to the "Wimbush" bell, which used to strike the hour. 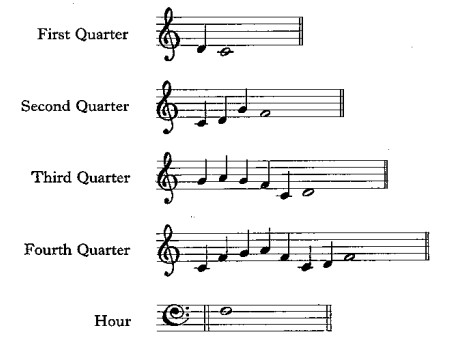