Because almost none of Peter Tranchell's music was published during his lifetime, or known outside his immediate circle, recordings are scarce. On this page we have listed both the commercial recordings that are available on CD or streaming services, and some private recordings that we are making available on this website and in the Peter Tranchell YouTube channel. If you subscribe to that channel you will be notified when we publish new material.

We'd be very grateful if you could contact us if you know of others.

If ye would hear the angels sing on Dormi Jesu: A Caius Christmas, 2014, Delphian http://www.cai.cam.ac.uk/recordings/dormi-jesu-a-caius-christmas

If ye would hear the angels sing on Nine Lessons & Carols, King's College Choir, Stephen Cleobury, 2012, available through Hyperion http://www.hyperion-records.co.uk/dc.asp?dc=D_KGS0001 (the web page includes sound clips of all tracks including If ye would hear).

Psalm 141 (Lord, I call upon Thee) and Psalm 133 (The Peace of God) on Priory PRCD 1189 O Sacrum Convivium - Music for the Mass sung by the choirs of St George's Metropolitan Cathedral Southwark, directed by Norman Harper (Caius 1970) and accompanied by Frederick Stocken. Available from St George's Cathedral @ £11.99 plus p&p - also available generally c/o Priory's distributors. Psalm 141 is available on YouTube (courtesy of NAXOS of America).

People, look East on Christmas with St John's, Signum Classics released November 2016. A sample of the track can be listened to on the Hyperion website: http://www.hyperion-records.co.uk/dw.asp?dc=W19186_GBLLH1645818 Other recordings have been made available online by Truro Cathedral and Cambridge University - see People, look East for details.

Three songs from Zuleika, performed by Alex Kidgell and Martin Neary at the Commemoration Weekend Concert, 24th September 2005. The recordings can be heard on the Zuleika page or in the Peter Tranchell YouTube channel.

Songs from His First Mayweek, including Hadrian built a villa, and Just a toothbrush and pyjamas

Five Thackeray Ditties - see the commemoration CD below, and the YouTube channel.

Sonatina for pianoforte private recording made by John Fraser, 2004, for Christopher Bishop, as a gift to Elizabeth Jane Howard.

The 1958 Sonata for Organ, performed by Norman Harper on the organ of St. George's Cathedral, Southwark, will be released on Signum in 2022 - watch this space for details.

Various tracks on Music from Caius, 1985, Vista Records (out of print, but remaining copies can be purchased from Gonville and Caius College - please contact the Choir Administrator - or 2nd-hand copies can be found on the internet). 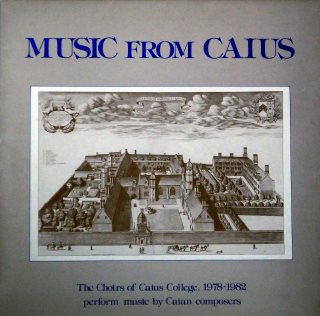